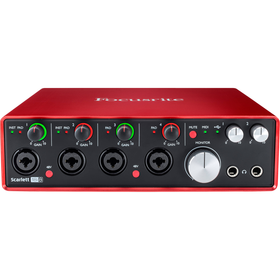 The Focusrite Scarlett 18i8 (3nd Gen) features everything you need to turn your computer into a digital recording solution, improving on its original design to deliver maximum audio quality and performance. The interface features a 18 in / 8 out configuration, featuring eight analog inputs with four Scarlett mic preamps and two newly-designed instrument inputs. The newly-designed instrument inputs give you the ability to record any instrument input, even the most demanding guitar pick-ups. There are also four additional line inputs located on the rear panel allowing you to connect devices such as synths and sequencers.

As well as the standard connections for recording instruments and microphones, the 18i8 also features a range of different inputs and outputs including digital connectivity with SPDIF inputs allowing you to record six simultaneous channels at once. In addition to the SDPIF inputs, the interface also features MIDI connectivity allowing you to connect a range of external MIDI devices with everything from MIDI keyboards to controllers and more. Eight ADAT inputs have also been included, allowing you to expand on the interface's inputs and outputs via a external preamp. You can expand your connectivity up to 12 mic preamps and 16 analog inputs, for added versatility and performance value. Monitoring is handled by the two discrete headphone outputs, featuring dedicated volume controls for maximum efficiency, allowing both you and the artist to listen to your recordings as you work.

The Scarlett 18i8 has been improved tenfold with a range of new features and functions that improve performance and audio quality. One of the most prominent upgrades is the new super-low latency performance. The super-low roundtrip latency improves performance and efficiency by minimising the delay between the original signal and the processed signal on your computer. This is paramount when recording vocals or instruments as it gives you the ability to record signals as close to real-time as possible.

The Scarlett 18i8 now operates at a sample rate up to 24-bit/192kHz for maximum audio quality, perfect for capturing high quality recordings from both microphones and instruments. The Scarlett Mic Preamp has also been improved featuring a more even gain structure, allowing you to accurately set your levels and in-turn, streamlining your workflow. Additionally, Focusrite has included analog protection circuitry for both the input and outputs to combat against unwanted power surges.

One of the most overlooked features of this audio interface is its compact size and lightweight chassis, making the interface highly portable. With its portable design the Scarlett 18i18 can be transported easily in a backpack or other carry case, allowing you to use your interface wherever you are. This can be advantageous for collaborating with other musicians who may not have the same equipment as you, or for recording in different places from your home studio. The interface itself is constructed from a red anodised aluminium unibody chassis for maximum durability as well as looking highly stylish. Monitoring and volume control is handled by the front panel controls, featuring a large monitor/headphone level dial plus individual controls for both the microphone and instrument inputs. The rear of the interface feature 2 monitor outputs (RCA phono) allowing you to connect a pair of studio monitors directly to the interface.

The Scarlett 18i8 also features a brand new software bundle, providing you with everything you need to record, edit and mix your recordings. The new software bundle includes: Red 2 & 3 Plug-in Suite, Softube Time and Tone Pack, Ableton Live Lit music making software, Novation Bass Station VST with AU Plugin-Synthesiser, 2GB of Loopmasters sounds and samples plus Pro tools First (First Focusrite Creative Pack). This software bundle provides you with everything you need you get started out of the box. The addition of the Pro Tools First (First Focusrite Creative Pack) adds to its functionality, providing you with the Pro Tools First software and 12 free plug-ins.