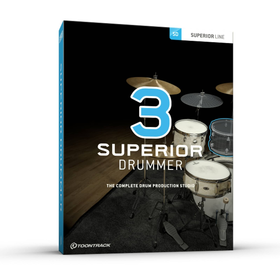 If you thought that Superior Drummer 2 was the ultimate drum production software, you were right. But not anymore.

Redesigned from its very roots, Superior Drummer 3 takes everything that made Toontrackâ€™s second iteration of the series so outstanding and evolves it to a whole new level of awesome. If you need the definitive virtual instrument for drums, you need SD3 â€“ itâ€™s as simple as that!

Youâ€™re getting over 230GB of raw, unprocessed sound material recorded in 44.1kHz/24-bit by award-winning engineer George Massenberg for maximum clarity and stunning fidelity - over eleven times the size of its predecessor's core library! There are approximately 350 vintage and classic drum machine sounds included and each drum was recorded with an additional 11 separate room mics in a surround configuration for absolute immersion and can be played back in stereo or using up to 11 channels for surround systems â€“ every aspect of the sound has been meticulously captured and presented here in a way that will satisfy even the most demanding drummers, composers and programmers!

Everything has been reworked and improved upon â€“ a new and improved scalabale interface with detachable windows and refined search function make for a massively improved workflow; integrated offline audio-to-MIDI conversion; a staggering 35 mixer effectsâ€¦ Superior Drummer 3 truly is the complete drum production studio!

Popular â€˜Edit Play Styleâ€™, â€˜Tap2Findâ€™, â€˜Song Creatorâ€™ and â€˜Song Trackâ€™ features return with their own improvements, as well as a built-in MIDI grid editor and DAW automation for built-in macro controls. In-built support for keyboard shortcuts and the ability to drag and drop or import individual and third party samples give you more control than you could ever imagine!

Because with Superior Drummer 3, you are in control. So take a seat at the console to hone, mold, shape, mix, match, blend, saturate and create â€“ on your terms. Superior Drummer 3 is a complete drum production studio and the ultimate framework for creative sound design.

When purchasing this product with a Carillon computer we will download and install before shipping.

The Superior Drummer 3 software and the full core sound library are delivered as downloads, available directly from the Toontrack Product Manager upon registration.

The sound library is configured in six (6) convenient download packages: